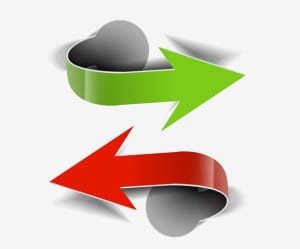 Anyone who has traded football pre-match on Betfair will have noticed something that can often happen and for some reason often happen against you. You will have opened a position on a team, either backing or laying, and then the price is slowly moving in your favour and a profit looks likely to be produced. Then suddenly, from nowhere, the price jerks drastically against you and puts you in a losing position. Usually this happens within the space of a few minutes so there is not much you can do to react.

This can be frustrating as your winning position is now a losing one and you have no idea why this has actually happened. Novices in particular will find this particularly frustrating and I do get many emails from those asking me just why this might have happened.

Here are the usual 3 causes of one of those sudden pre-match price moves and what you can do when it happens.

The main reason is usually a HUGE bet being made by one of the big “whale” bettors over in Asia. These guys often put down 5-6 figure bets and it is bets like these that can move the markets by a few ticks as the Asian books adjust their lines and then Betfair and the rest of the world follows suit. Previously these moves would happen slowly over a few hours but these days it is pretty much instant. You might think this type of bet is based on some sort of inside knowledge but the reality is just that they are fancied by the professional punter and the lines are adjusted as a result.

Another thing that can cause these sudden moves is a team news rumour. These sudden moves will often happen during the day, well ahead of kick off time. If someone somewhere believes that a key player is not going to be involved then they might put in a huge bet, maybe in Asia again, which then moves the market. If the price moves suddenly in one direction before returning back in the direciton it was previously going in then this is usually the result of a rumour and someone acting hastily.

3 – You picked a temperamental market.

Sometimes you might have just picked a temperamental market that is susceptible to price moves. These are usually foreign matches where the liquidity is not quite as strong as it might be for a Premier League match. I might also throw cup (FA Cup, League Cup) into the temperamental category since the team news rumours (as mentioned above) will be rife since no one is usually very sure of who will be starting. International Friendly matches are also matches to be wary of.

To be honest, you should not really be trading these matches unless you have quite a bit of experience anyway. You should look to trade matches where you have a pretty good idea of who will be in or out of the team so there will be no nasty surprises that catch you out.

What should you do when these moves happen against you?

Firstly, do not panic. Some will see these sudden moves go against them and freak out. They will automatically assume it is going to get worse and exit their position. Which can cause more frustration when the price goes back in their favour and it was proved to be just a “bump” in the road.

You will find if you pick the markets right then these sudden moves against you are actually quite rare. Only experience will help you with picking the right markets though!