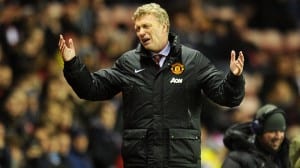 I never would have imagined writing an article asking this question previously but this season has seen quite a huge fall from grace for the champions.

At the time of writing they sit in 7th place in the table and are largely available @ 3 to make the top 4 finish at the end of the season. To put this into perspective they were matched as low as 1.06 before the season started.

Many Manchester United supporters are visibly worried by the possibility of not hitting the top 4 spots whilst the opposition supports are “loving” the turnaround in fortunes. Will they actually do it though?

On paper it can always look easier then it actually is. Last season, 73 points in total were needed to make 4th place. The season before it was 69 points that were needed and the season before that it was 68. Currently, Man Utd have 34 points from 20 games. If they match their form over the first 20 matches of the season up to the end of the season they will finish with about 64 points and, based on last season’s table, this will see them end in 6th place. Ironically, the same place Everton ended up last season.

So, as many expected an improvement in the 2nd half of this season is definitely required if Manchester United are to hit the 4th spot. There are 18th matches left and if they can win 13 of those or gather 39 points from a possible 54 then they should expect to get into 4th place. Manchester United are ‘traditionally’ better in the second half of the season but this was under Alex Ferguson. Nobody quite knows what to expect under David Moyes. Another worry is that the good form of the teams above them this season could mean that the points needed for 4th place might even be a little bit higher.

The big question is whether you should back or lay Man Utd @ 3 to make the top 4 spot. Considering they will need to drastically improve on their first half of the season performance you would wonder just how or where it will come from.

This situation reminds me of when AVB was in charge at Chelsea and had a poor first half of the season. Interestingly, his Chelsea team were actually 3 points better off at this same stage of the season yet AVB was sacked in March and Chelsea only finished in 6th position. So, perhaps getting rid of the manager sooner rather then later might be what is needed but I can not see that happening.

Manchester United have never finished lower then 3rd in the history of the Premier League. However, if they are to make 4th place you have to feel something drastic will have to happen to resuscitate their season as a repeat of the first half of the season will mean they fall short. This could be a change in manager, new signings or the return of an in-form RVP. If none of those happen and soon then I will be laying them for sure.

As many of you might know by now, Bookmaker Ladbrokes have bought the world’s second most popular Betting Exchange Betdaq in a deal expected to be worth £25 million. BONUS: Discover the Cash Out SECRETS that Betfair do NOT want you to know! 100% FREE eBook for you! CLICK HERE! An email was sent out…

Tuesday was quite an entertaining day from a personal point of view when I look back on it. Those following me on Twitter will have shared in my anguish as I slightly messed up a pre-match trade on Arsenal. BONUS: Discover the Cash Out SECRETS that Betfair do NOT want you to know! 100% FREE…