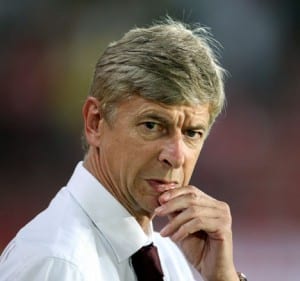 Arsenal’s 0-0 draw at home to Sunderland might have been an indication of how tough the season might be without Robin Van Persie.

In that same fixture last season Arsenal took all 3 points with a 2-1 win over Sunderland, but it was Robin Van Persie who scored both the goals that day. The fact that Arsenal failed to score last weekend was disconcertingly ironic and Arsenal supporters might have a right to be worried about the future of their club.

If you were to take away all of Robin Van Persie’s goals for Arsenal in the 2011/12 season then instead of finishing 3rd they would have finished….

Last season, Van Persie’s 30 Premier League goals were worth 24 points for Arsene Wenger’s men and so they have quite some void to fill in the coming season.

Obviously, football is not that simple and you have to expect that someone else will step up in his place and score for Arsenal this season but do they have a man that will get them 30 goals this season?

Unless Gervinho transforms into a world beater or Giroud ends up being the signing of the season then you have to say it is not likely.

Robin Van Persie was worth 24 extra points for Arsenal last season but in the Premier League the margins for error are very small. Just 6 points less last season would have seen Arsenal in 5th place and out of the Champions League which can be very damaging for the future of the club. Just ask Liverpool fans how life without the Champions League is treating them!

The transfer window is still open and there is still time for Wenger to sign a world class striker but if he doesn’t then you would have to be very worried about Arsenal’s top 4 prospects when you consider how reliant they were on Robin last season.

Currently, Arsenal are priced @ 1.80 to finish in the top 4. This is actually a good value price when you consider Arsenal have NEVER finished outside of the top 4 under Arsene Wenger which is a 15 year record. However, has Wenger ever had a squad as weak as the current one?

Time will tell but there is no doubt that finishing in the top 4 this season will be the biggest challenge of Wenger’s Arsenal career so far. If it is challenge he fails it could also be his last.