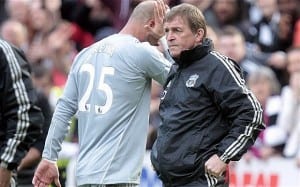 Looking ahead to the weekends matches and once again there is a price that sticks out like a sore thumb and yet again its the price on Liverpool.

If you remember last week I highlighted the, rather silly, price on Liverpool away to Newcastle. They started the match priced @ 2.20 whilst my ratings had them down as being 4.2 shots. Well, it seems the markets are at it again with Liverpool currently priced @ 1.48 Vs Aston Villa when my ratings suggest they should be 2!

It looks like the markets are pricing Liverpool purely by their famous name and not by their current form, which is 6 defeats in the last 7. It is true that Aston Villa have been playing terribly recently but they should still be a tad shorter then they 9.

This feels like 2010 all over again when Liverpool were playing terribly near the end of Rafa Benitez’s time in charge and yet the markets still priced them strongly.

Last week, I took a pre-match position by laying Liverpool expecting them to drift and instead they steamed. I am hoping that this time the markets will finally see sense and we will get a drift before kick off, especially when you consider that Pepe Reina is suspended too. Aston Villa do have their own injury worries too with Darren Bent and Nzgobia still out along with Petrov for obvious reasons, but I am holding out hope that the markets wont be silly enough to pile into Liverpool yet again before kick off. It must be pointed out that Liverpool have a superb home record against Aston Villa with only one Villa victory in the last 10 years.

The only other discrepancy this week was Swansea @ 2.40 Vs Newcastle when they should be 2.80. It’s quite a big one but its hard to make my mind up about. Swansea have lost their last two matches, whilst Newcastle have been quite patchy away from home. They are the type of team that can win comfortably 3-1 or end up losing 5-2 as we have seen this season.  It is hard to tell which way the markets will go on this one and following the morning trend will probably be the best way to go.I am hoping its a good match since there isn’t much other action happening on Good Friday.

Good luck to those getting involved this weekend!

A question I often get emailed to me goes along the lines of “Can I still profit from trading xx sport even though I do not know much about any of the players etc?”. BONUS: Discover the Cash Out SECRETS that Betfair do NOT want you to know! 100% FREE eBook for you! CLICK HERE!…

The fact that GOAL PROFITS is still running and well into it’s 3rd season of trading should show you that this is a serious service worth checking out. BONUS: Discover the Cash Out SECRETS that Betfair do NOT want you to know! 100% FREE eBook for you! CLICK HERE! These days it does seem like…