A huge night of football trading action last night with matches from the Premier League, Bundesliga, Serie A and La Liga all in-play simultaneously and I expect many in-play traders were finding it hard to keep up.

Thank god for Flashscores is what I say!

I had one eye on the live Sky Match between QPR & Swansea,my other eye on the Madrid Derby and one of my other eyes on a live stream of Wigan-Man utd which was a bit of a shocker as we all know. (EDIT: I don’t really have 3 eyes but I do have a sense of humour 😉)

I was slightly amused when Wigan “scored” in the first half and the goal was disallowed. There were a few traders who didn’t quite have their eye on the ball and obviously thought they were hoovering up some really good prices considering Wigan were “leading” 1-0. 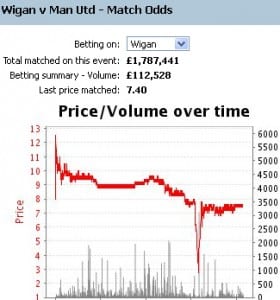 As you can see from the screen-shot, someone piled into Wigan and drove their price down from 8 into 3!!, only to have eat humble pie moments later when the goal was chalked off.

As is said a million times before, if it looks too good to be true then it probably is!

It is not often you can beat the suspend monkey on Betfair and if you can it isn’t likely to be an English Premier League match which is certain to be watched by more then a few eyes in the Betfair HQ. Perhaps maybe even by someone with 3 eyes!

Title Race Back On?

It did appear that the title race was over after the weekend but last nights results have had to make everyone think again.

Man City moved from 20 into 5.5 to win the title which would have made for a pretty decent trade if you were daring enough to do so before kick off yesterday. Man United, who have traded as low as 1.03, are now out to 1.22.

Man City go away to Norwich City and could quite feasibly win that match, they are 1.65 to do just that too. If Man City DO win that match then that would bring the gap down to just 2 points before United play Aston Villa on Sunday.

To go from a situation where it feels like you have it in the bag to, all of a sudden, knowing you don’t have anymore margin for error will heep pressure on even the best teams. I expect Old Trafford will be a very nervous place to be if United only have a 2 point lead @ 4pm on Sunday and it could reflect on the players.

So.. You never ever know in football and if you are already green on the winners market then it could be worth taking on United @ 1.22 ahead of the weekend to see what happens. Low risk but potentially huge reward if the red half of Manchester start cracking up just like the blue half did!

This is a guest post from Steven Hall.  Steve is a full time football trader and also the brains behind Dynamic Football Trading which is one of the best courses on in-play football trading that have been released to date. BONUS: Discover the Cash Out SECRETS that Betfair do NOT want you to know! 100%…