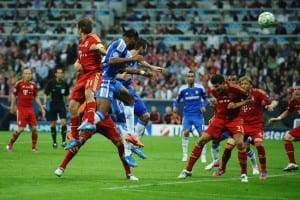 If you are watching a football match and the ball goes out of play for a corner kick you normally feel the buzz of excitement from the crowd as everyone feels a corner kick has a fairly decent chance of producing a goal. However, recent research has actually suggested that corner kicks do not provide as many goals as first though. At least in the Champions League that is..

Statistics released by UEFA themselves have shown that in the Champions League for 2011/12;

There were 27 goals scored from 1250 corner kicks last season. This means that there was 1 goal for every 46 corner kicks.

Overall, just 22% of all goals scored in the Champions League last season were from Corner kicks which is a drop from 35% in the 2001-2002 season.

The exact reason for this could be that defenses are much more organised from corner kicks then previously. On the flipside, it could also be that players arent delivering the right balls anymore but I will be more inclined to go with the former.

Anyway, this is all quite relevant from an in-play betting point of view as there are many in-play traders who will get involved in the markets when a corner kick is being taken. Obviously, if a goal is scored they can profit from the team they have backed as the odds will plunge. If no goal they will take a small hit and wait for the next one.

This can be a very profitable strategy if you pick matches with teams that have good aerial strength (i.e Stoke) and if you have fast pictures and software. I have dabbled with this myself sometimes and its possible to take zero loss in some circumstances too.

However with such a small amount of goals coming from corners it might be time to rethink that strategy as all those small losses do add up, in the Champions League anyway.

If you watch the markets closely when someone is shaping up for a shot you can see plenty of people throwing bets in the market which causes a brief spike in odds. With these statistics it might possibly mean you are in a better position by laying the team about to shoot from a free kick rather then backing them like everyone else!

Betfair are constantly adding new markets to their exchange but it is not often you see them adjust a previous market, especially a popular market but this seems set to change. BONUS: Discover the Cash Out SECRETS that Betfair do NOT want you to know! 100% FREE eBook for you! CLICK HERE! In an email…