You are here: Home / Interviews / Jim Makos: “How I Made €100k From Betfair Trading” 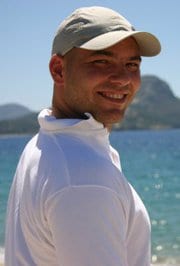 Jim Makos is well known investor from Greece, who has made a lot of money online via different investment opportunities. One of them was Sports Trading, or Betfair Trading, as most people still call it.

A few years ago, Jim made over €100,000 from trading the Betfair markets but these days you won’t find him doing any trading to do with Betfair. So just why is this? And how did he manage to make so much in a short space of time? We caught up with Jim Makos himself for a chat!

STL: Hello Jim makos, Thank you for taking some time to have a talk. The first thing to ask is, how and when did you originally get into trading on Betfair?

JM: Thanks for the opportunity to share my thoughts and experience with other players. I initially bumped into Betfair in the early days of 2004 but couldn’t understand a thing about their interface and I believed I’d never return. All those blue and purple squares didn’t make any sense for me, while I was trying to find a winning betting strategy, mainly on football. Then in May 2004 I came across Racing Traders’ website, watched Adam Todd’s trading video for more than 100 times – literally – and figured that seemed a relatively easy way to make money. I deposited about €500 and began trading in the start of July.

STL: What were the main sports you were trading and how long did it take you to get profitable?

JM: I only traded horse racing betting markets, as the video showed that particular sport and I noticed there weren’t that much opportunities in other sports, at least for a newbie as I had been at that time. In all honesty, I managed to turn that €500 into €1,100 by the end of July 2004, so I was able to show a profit right from the start! It was really VERY easy to make money back then. I should note that I traded via a 56k dial-up internet connection to make that money! Compare that to today’s conditions and you’ll understand how much the game has changed!

STL: So you made over €100k in less then a year and a half! What sort of stakes were you using to achieve that?

hen I started I traded with small stakes. In August 2004, I had an ADSL connection installed and gradually increased my stakes which led me to make about €3,000. I can’t recall the stakes, they wouldn’t have been that big, but I still remember the first time in September when I lost all that 3K when I got caught up in-running and then once more in late September when I blew my bankroll in the same exact way. I took a 10-day break, deposited €2,000 in the first day of October setting strict rules and from that day the profits kept increasing for about a whole year. By the time I was making more than €8,000 each month, I used no more than €6,000 as a capital for my trading purposes. I had that bankroll divided in 4 equal parts (€1,5K each) which allowed me to enter a market 4 times before exiting. The stakes I used were calculated by dividing that amount (1,5K) by the odds I was going to trade. For example, at 2.00 odds, I would trade with €750, at 5.00 odds, I would trade with €300, and so on.

STL: Do you think the markets were easier in those days or that you just found a strategy which worked and capitalised on that?

JM: Nah, the markets were far too easy, it was like picking up money from the street. Ok, discipline and focus were crucial, but given the fact all you had to do was to follow the money, and even a dial-up connection with 2secs refresh rate was sufficient to make money, there was no need for some fancy strategy. Patience and speed could turn you into a winner in no time. However I began watching the graphs at the end of 2004, which helped a lot more, since other traders apparently hadn’t studied anything about technical analysis and just watched the market depth. I guess that improved my strategy’s edge, but I could have shown a profit without it.

STL: So what happened to make you stop trading on Betfair?

JM: Things were looking great until 2006. My winnings were dropping to about €4-5,000 per month and I kept switching trading platforms, as by that time no one was trading through web browsers. Trading was getting a bit more difficult due to popularity and opportunities were becoming rarer, while I needed to act faster. Still profits were made. In late 2006 I was barely making €3,000 while I had already begun studying about online poker, which I found more attractive back then. Eventually in the beginning of 2007 I noticed that other traders were faster than me and by the time I submitted a bet, I was too late to get advantage of the opportunity. On the contrary when my bet was matched, the market more usually than not turned around and my losing trades outnumbered my winning trades! I was pretty sure I was behind in terms of time and speed by a lot of traders and I couldn’t make it pay any more. That’s when I decided to throw the towel, having only losing days to show in my P&L screen.

STL: Since you believe your strategy is no longer profitable are you able to reveal a little bit more about it?

JM: I already mentioned a bit about the strategy above. The markets back then had a lot of gaps between their odds. For instance, volume of money was being added on the lay side of a favourite horse in terms of hundreds of euros, while the back side kept getting thinner in volume and the odds were like 2.02 – 2.06 – 2.12. On one hand you would see thousands of euros laid at 1.98, 1.99 and 2.00, and on the other hand just a few hundred on gapped odds. Even a child could see that the odds were going to climb! You also had the option to win more than one tick (2.00 – 2.02) since the gap between the odds allowed you to place a back bet at 2.10 and be the first in line! So, when panic kicked in and everyone was laying, nervously pressing any odds available could lead your bet to get matched in a matter of seconds, although you had placed it that far! Additionally, placing a €750 bet when no other money was interesting in backing, didn’t scare off the layers. It was really that simple, especially in trending markets. When the markets consolidated, that is odds fluctuating between known limits like 4.80 – 5.20 for 10 minutes, all you had to do was to lay at 4.9 and back at 5.1 several times before the off. Odds at crucial levels like at round numbers are very important, even in today’s markets.

STL: So are you saying its impossible for anyone to make a living from Sports Trading now?

JM: By no means, no! I know of traders who constantly make money month in, month out since 2007! They in fact learnt about sport trading via my blog. They do though complain about the recent extra charges Betfair is applying in their betting exchange. They manage to make about €6,000 per month trading the same exact market before the off as I once did. When a strategy doesn’t work, maybe another does. It doesn’t mean that because I am not profitable, no one can, far from it. Since I’m losing, someone is winning! It’s that simple!

STL: If someone wanted to gain an edge on the Betfair markets today, what advice would you give them?

JM: Get the fastest internet connection in your area, make the most out of it improving speed and ping times and in case of non-UK players, read about the order rerouting through Malta, losing them 500msecs when submitting their bets. Virtual Private Networks (VPN) can also help. It’s all about speed I guess. Also, investing in a trusty Betfair third-party software/trading platform is essential, since instant betting and auto-refreshing are considered child’s play.

STL: What is your view on technical analysis on Betfair? Can this be used to gain an edge on the markets at all?

STL: You did very well with horse trading but did you ever try other popular trading sports such as Football or Tennis?

JM: I occasionally trade tennis in-play, mainly due to making a video recording for my Greek betting blog, where Greek bettors learn for the first time the meaning of trading. I’m not aiming to make money out of it, so I just use my experience on charts and try explaining how support and resistance or trend lines can help a Betfair trader decide whether to lay or back a tennis player during the first set of the game. I once tried trading football games with little success. I opened a trading position a couple of days before the official match day and traded out a couple of hours before kick-off. As I had to invest a large portion of my bankroll for a couple of days just to perhaps make miniscule profits, I quickly abandoned that kind of trading. Yet, I have noticed some nice odds movements in specific football games where the odds do provide enough volatility for someone to win significant amounts of money. I’m always talking before kick-off as I regard in-play trading an investment of extremely high risk.

STL: Finally, So what does the future hold for you now? Will you ever return to Betfair or are you enjoying other investment opportunities now? 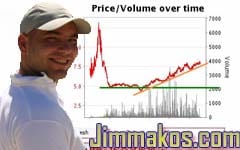 JM: Well, if someone told me I could return to Betfair and win the same profits I used to make, I would definitely return! However online poker is a game I have invested a lot of time and effort during the past 5 years and although things don’t look that good there either, I do invest time playing poker online. At the same time I have moved to stock and forex trading, trying to play with the big boys and getting my trading skills to another level, sharing my experiences through my trading blog. Surely traders can make money in Betfair but the question is if that trading is scalable. If you are very good, you can win as much money as the markets allow you to. Betfair really can’t compare with worldwide financial markets in terms of volatility and liquidity. There are simply too many opportunities to look for there and you can always bet €1M on a single US stock. Imagine betting that amount of money on a horse just to win a couple of ticks! Besides gambling, I have done a lot of studying about blogging and how to make money buying, developing and selling websites and domains. I’m always on the lookout for new investing opportunities and creative ways to make money.

Many thanks for taking the time Jim and good luck for the future!

You can read more about Jim at his Sports Blog or his Online Trading Blog.