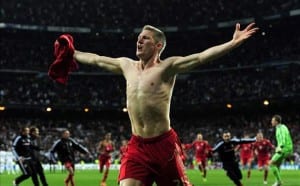 It was another superb match for in-play trading between Real Madrid and Bayern Munich with the markets slightly over reacting to what appeared to be a strong Real Madrid start to the match.

With Real Madrid going 2-0 up after 15 minutes you might have thought they were going to cruise through however it seemed to me that a lot of people were forgetting that only ONE goal from Bayern would level the tie once again. Also, in my view Madrid went ahead to two very soft goals. The first penalty was debatable and the Ronaldo 2nd goal was just a defensive lapse. Bayern Munich were clearly playing the better of the two sides and so it looked like the prices were all going a bit too low too soon and there was a strong chance Bayern would get back into it somehow.

Real Madrid actually traded as low as 1.09 in the To Qualify market which was bizarre since they were technically only one goal ahead at this stage. 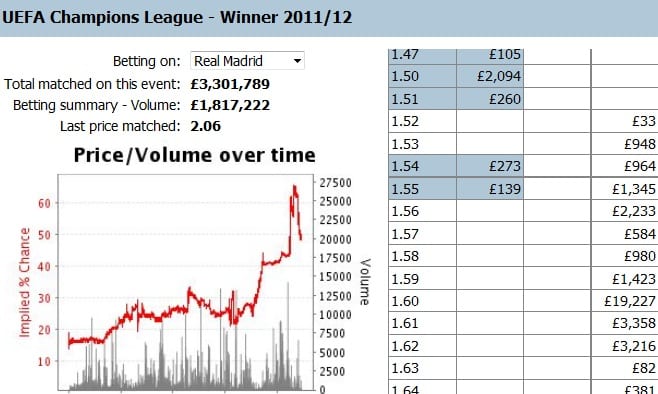 Most strange of all was the movement in the Champions League Winners Market.

Once Real Madrid went 2 goals up this market was assuming Madrid had already qualified and they traded as low as 1.52 at this point. A price that drifted dramatically after Robben levelled the tie and the realisation set in that this was not going to be easy for Madrid.

The beauty of trading this market in-play is that it never suspends and there is no in-play clock delay either. You could actually lay Madrid @ 1.80 when Robben was putting the ball on the penalty spot and they drifted to 2 once the ball hit the net. It is not an opportunity that comes along often but it is something to keep an eye on in future 😉

It is also interesting to note that the trend highlighted on Tuesday about teams struggling to overcome deficits at this stage of the tournament held true once again and punters could have had some great prices on Chelsea and Bayern to qualify, especially if you had that as a double!

The penalty shoot out was a traders dream and I managed to record it for a change too.

This was the prices in the To Qualify market just as the shoot out began with Madrid slight favourites.

Just two penalties each later and two misses from Madrid left Bayern already trading as low as 1.06 to qualify which leaves you in one of those great low risk but high reward situations if you were to take on the germans at this point.

2 Bayern Munich penalty misses later and look where the prices are now!

Then Ramos misses and this was the price before Schweinsteiger was about to take the final decisive and winning kick.

And that was that.

In the end we had a tie that saw both teams trade below 1.10 in the To Qualify market which highlights just how entertaining this was. You know its a tight finish when the winning team doesn’t even touch the 1.01 mark in the markets, but I guess after the epic gubbing on Tuesday night some punters might have had second thoughts about backing any team that low again for a while.

As we head towards the final on May 19th, Bayern Munich are the new favourites to win the trophy and the markets have them priced @ 1.50 to do so. Some would say we didn’t get the final we all wanted but I think this one could be equally as entertaining!

We have all been there haven’t we? BONUS: Discover the Cash Out SECRETS that Betfair do NOT want you to know! 100% FREE eBook for you! CLICK HERE! You have a few bad losses in a row and you see a sizeable part of your bank has gone. You get annoyed and decide the only…

We have a very exciting guest post from Dan Weston of TennisRatings.co.uk who is the KING of tennis trading stats and he is going to talk about which ATP players are statistically most likely to choke from winning positions and which are least likely. Knowing who is likely to choke is useful since we can…