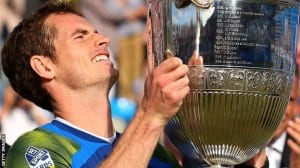 An excellent final to cap off a very entertaining Queens Club. It is always better for a tennis trader to trade matches that end up going to 3 sets and there were plenty of opportunities at this tournament in the past week.

When it wasn’t raining of course!

Murray started the match as 1.22 favourite and after scoring an early break point in the very first game he was into 1.10. A little bit too low when you consider how much of the match was still left to play.

At this point Murray also hit 1.04 to win the 1st set which was also way too low when you consider it was just the 1st game of the set and there may be about 4 or 5 more times where Murray has to hold serve himself.

Those who were backing those low odds learned a harsh lesson as Cilic broke back to level the 1st set and then the match took a further twist when Murray fell awkwardly when defending a shot. This was definitely an obvious turning point in the 1st set.

It did not seem like Murray was injured physically but mentally his game was definitely affected. In the immediate aftermath of the fall Murray only drifted from 1.20 out to 1.35. I was surprised he did not drift more as Murray definitely seemed a bit shaken and his game began to wobble in the proceeding games after that.

So much so, that Cilic ended up winning the 1st set (7-5). This was after being backed as high as 21 to be the first set winner.

Heading into the 2nd set, Murray was still favourite to win the match and the tournament but he was now out to 1.80 with the markets seeing Cilic priced @ 2.20. You could see Murray changing his footwear during the break between sets which would have made him more confident heading into that set and plenty where backing Murray going into that 2nd set.

Cilic did not make it easy for Murray at all and was extremely resilient during the 2nd set. Those who were hoping to back Murray and green up early in the 2nd set had to rethink their strategy as Cilic pushed Murray all the way and he eventually won the second set 7-5.

The 3rd set turned out to be very easy for Murray with the British Number 1’s overall fitness looking superb. In the end, the highest Murray was matched was 1.96 in this match.

The highest Murray was matched in the Winners Market was 12, ignoring a, rather bizarre, £1 matched @ 1000 for Murray. Not sure how that happened but somebody can not have been happy with paying out on that one.

Well the Europa League trading last night was certainly fun. BONUS: Discover the Cash Out SECRETS that Betfair do NOT want you to know! 100% FREE eBook for you! CLICK HERE! As I mentioned yesterday I was keeping a close eye on the “To Qualify” market to look for opportunities and just learn this market…