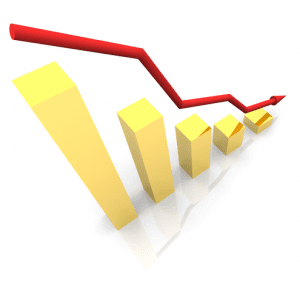 The next step after devising a Betfair trading strategy is to begin testing it, But how long should you really test it for until you can conclude its profitable or not? A week, a month, one year, ten years?? This is a question I often get asked a lot via email and I see many people asking on forums too.

Time Is Not The Answer

The first thing I must say, is that when it comes to testing a strategy then the amount of “time” isn’t actually relevant to it.  I actually think if you say that you will give something “a couple of months” to test it then you are potentially already doing things wrong.

The amount of “time” you give to test a strategy is all relevant and depends on the strategy in question.

For example, I could devise Strategy X which gives me 100 trades within the space of a month. After a month you could have a data sample of 100 trades to look at which is a decent sample to begin with.

However, I could also devise Strategy Z which only gives me 5 trades per month.   At the end of a months worth of testing I now have a data sample of 5 trades to look at.

I have just tested both strategies for a month and both have turned a profit. In the case of Strategy X you could clearly say there was potential but could you really say the same about Strategy Z which has only had 5 trades?

After 6 months of trying Strategy Z, I now have a grand total of 30 trades in my data sample and that strategy is still in profit.

If someone turned to you and said that they had a strategy which they had been using for 6 months and was in profit then it would sound great wouldn’t it? Then if you found it was only 30 trades within those months it wouldn’t sound so great.

I think you see the point I am getting at here.. 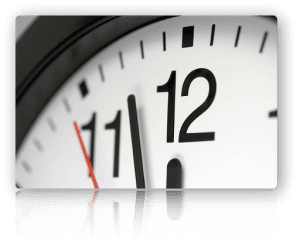 The important thing to look for when trialing a strategy is the data sample and not the “time”. You shouldn’t look to trial things for “a few months” it should really be “1000-10,000 trades” depending on the type of strategy it is.

It might sound like hard work to trial something for 1000 trades but no one said this game was ever easy!

Another crucial thing to bear in mind when trialing things is to take “down swings” into account. I fully expect that the average newbie trader will trial something for just a few trades and will probably give up by the tenth trade if it is in the negative and they will never return to it again. It wouldn’t surprise me if some abandon a method after the first trade if its a loser!

Conversely, you could be trialing a losing strategy and it could turn an initial early profit which encourages you to stick with it. Some might even make the mistake of upping the stakes a bit too early and then when the data sample grows they end up losing money.

I know this for a fact because I used to do exactly that many, many years ago when I first started in this game. The saying goes “first impressions are everything” and it certainly seems that way when you are trying out a new strategy.

There are many people that join a service when its in a down swing and then just cancel without seeing it through. They end up missing the up swing and then they go complaining on forums that the service wasn’t good.

I have pasted a few screen shots below of a graph showing the trial of a method and you can see the sort of swings that can happen. These graphs might be SHOCKING viewing for some! 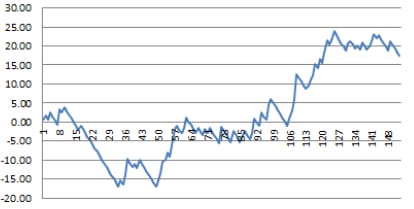 This strategy is 20 units in profit currently after 148 trades.

However, look at how it started out! After 50 trades it was 15 units down! What would you have done if a method was 15 units down after 50 bets? This could well be a method that only produces one to two trades a day so after a month of testing you could be -15 units. After that sort of start you can imagine many will abandon it, or even worse, try and tweak it to improve it. This graph is a clear example of what can happen when you stick with a method, but you should ask yourself honestly, would YOU have stuck with this method past the 50 bets?

Here is another example: 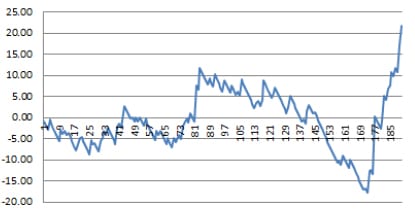 This strategy is 20 units in profit after 185 trades. Still early days but look at the volatile ride it has been on!

This one got off to a negative start but if you stuck with it you would have been 10 units in profit after 81 trades.

Then comes a HUGE down swing of 25 units by the 169th trade. If you had stuck with it during that time would you keep going or would you assume you initially got lucky and now its showing as a bad method?

What if you joined this service when it was at its 81st trade? You would have lost over 25 units just 88 trades later. Would you stick with it after a down swing like that?

Ideally you would want to test a method over a data sample of at least 1000 before you even begin to start drawing conclusions. Even then, in the grand scheme of things 1000 isn’t that big a sample but you also have to take trends and the fact that the market evolves into account too.

One thing is for sure from looking at these graphs, if you are someone who doesn’t have much patience then this is never going to be a good way for you to make money. If you are going to test something, then either do it properly or don’t do it at all!

Today we have Steve from Goal Profits on the blog to tell us how he approaches trading a new football season as it can be quite tricky when you are not quite aware of form and the major changes in each team. BONUS: Discover the Cash Out SECRETS that Betfair do NOT want you to…