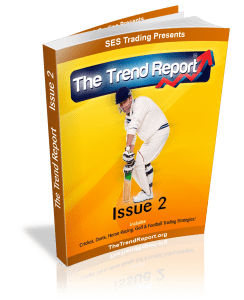 Just a quick one today as with the T20 World Cup now underway I have had a few emails and inquiries asking about cricket trading strategies to trade t20 with.

Well, for those who missed it earlier in the year there was a great method put forwards by Chris Shepherd

This strategy was called “The Bowling Method” and was a result of the research that Chris did into the IPL tournament in previous years but it ended up doing very well in 2012 also. In the end, trading with £100 stakes and risking an average of £32 per trade, this method produced a profit of £590 over the whole tournament and plenty of readers did very, very well from it back in April & May.

However, that was purely the profit you would have made just by trading using it mechanically. With a little human intervention you could and should have done much better. For example, the system dictates a certain stop loss point and you come within 2 ticks of it before you notice the match turn on its head. Sticking to the system might have then produced a losing trade but common sense would have seen you get out of that trade with some sort of profit if you keep your eye on the match at hand.

Also, the biggest swings and low risk opportunities in T20 cricket usually come in the late stages. If you keep an eye on the matches and sense a tight finish you can easily use your earlier green screen to leverage higher profits by the end of the match. There will be more then a few teams hit lower then 1.10 and get beaten in this tournament I assure you of that!

Anyway, I would say this is a great method if you are hoping to cut your teeth with T20 Cricket Trading and it should work well in all t20 tournaments which is good with the Big Bash league also coming up too.

An interesting email dropped into my inbox at the end of last week and for a moment I thought I was dreaming. For years, the world of “courtsiding” at tennis matches has been something so secretive and closed off that even people like myself were not privvy to the information. We all knew courtsiding happened…