The title might put a few off, but its not as bad as it sounds. You will be happy to know that I am not about to tell you that I have taken to trading in the nude in order to squeeze more money out of the markets.

Well not yet anyway! 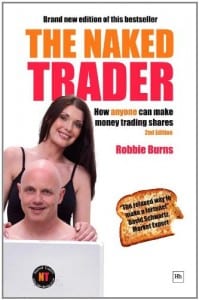 I actually dug out an old gem of a book called “The Naked Trader” by Robbie Burns this week. This is a book I read quite a few years ago however from time to time I like to re-read old books as I find that I always absorb even more information the second time around.

As I read, I started to realise some similarities between the way I trade and the way the naked trader does. The naked trader trades company shares but all trading is actually very similar.

He will open positions on various companies during the day and then let those positions run to a certain point which might be a stop loss point or a profit target.

This is similar to what I do when I trade football pre-match.

I will often open several positions in the morning and then monitor them during the day.

The key is that I always cut the losing ones short and let the winning ones ride for as long as they seem like they can go. I guess this was something I picked up subconsciously from reading “The Naked Trader” first time around as its pretty much what he does, albeit on a more long term basis. He will often hold his positions for days and weeks as opposed to a single day like myself.

As most people know, when I trade football pre-match I will normally open my positions during the morning but there will also be a point during the afternoon when I will assess my situation across the board.

If I spot a match which has gone against me a few ticks but hasn’t quite hit my stop loss then I will probably exit it regardless and use that same money as further leverage on the trades that are winning.

So I would definitely suggest that you spread your risk across a few markets rather then trying to go for a single big one. I have had a few emails from people asking if I will focus on trading just a single match pre-match if I have a feeling it will be a big mover. Well, I am someone who never likes to keep all his eggs in one basket. I will open up various positions and very often it’s the match which I least expect which turns out to be my big winner for the day!

So basically, Open up multiple trades at the same time that are all based on your usual entry points. Cut the losing ones short and let the good ones go for as long as possible. When you do that you can’t fail to make a profit in the long term!

Good luck to those trading the internationals tonight. I will be steering well clear myself but I do fancy opposing England as they only need a point to qualify so they will probably keep it tight and I would also expect a drift on the England price today too. Keep a close eye folks!