You should never bet on a 0-0 scoreline in a football match! Never Ever!

I have known this for a while but it only really hit me last night as I watched the Man City- Spurs clash!

You should never bet on a game to be 0-0 as you simply aren’t getting the best possible value! 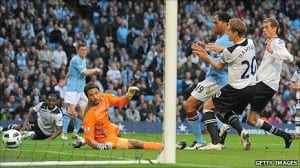 Yesterday I suggested that Man City Spurs could be a good shout for a goalless score-line and it eventually finished as 1-0 to Man City. Thankfully, I never actually took the bet anyway however if I had my wits about me then there is a way I could have had this bet and still won!

If you bet on there to be “No Goalscorer” then you are effectively backing the 0-0 however own goals don’t count!

Man City beat Spurs 1-0 courtesy of a Peter Crouch own goal and so if you backed “No Goalscorer” you would have still won!

Betting on a match to be goalless isn’t the type of bet that many people will actually do and it certainly takes a brave man to do that. However, if you ever plan to do that bet then make sure you bet on the “No Goalscorer” market as opposed to the correct score market. The odds will still be the same but even if the match finished 3-3 and all the goals were own goals then you still win!

If you remember this recent article about improving your in-play betting there was a point made within it about “thinking like the manager” and this is something that more punters really should be doing. BONUS: Discover the Cash Out SECRETS that Betfair do NOT want you to know! 100% FREE eBook for you! CLICK HERE!…

There are a few prices in this weekend’s premier league that are out of line with my own ratings. Predicting weekend price moves seems to be much trickier then during the weekend and even when homework is done the prices can still move in directions that are not expected. So do be careful if trading…